A day to cherish,

A day to celebrate,

And most importantly, a day to ponder upon… 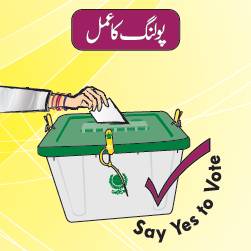 For the first time in the short history of this country, young and old; rich and poor; educated and illiterate; healthy and disabled; normal and 3rd gender all headed towards the polling stations to cast their precious votes. Some enthusiastic first-time-voters reached even before polling started. Such was the excitement in the air that if it could be transformed into electrical volts, it would’ve been enough to run an entire garments factory for a year at least…! Unified exhilaration like this is only seen on huge cricket victories by the men in green. But NEVER in the past have people been so thrilled about the process of electing their representatives.

So what was the rationale for this unprecedented election fever?

Many observers believe that it was the Pakistan Tehreek e Insaf (PTI) factor which pushed the voters out of their houses – Voters who believed that their votes could bring a much needed change in a repeatedly-plundered country. Whereas PTI might have been a huge reason but I believe this wasn’t the only one.

The journey of change has been slow but steady. It began with the freedom of media and the         mushrooming of dozens of news channels on the cable network. Being a novice at first, media also made many mistakes (read sensationalism) but its largest service was awareness among the masses. Moreover, the 2007 lawyers’ movement served to mobilize the sleeping nation which rose up quite forcefully to the challenge. This is when the common man realized the power of street politics. Hefty words like supremacy of constitution and rule of law became part of local jargon. With the restoration of Chief Justice of Pakistan in 2009, various other bodies (like doctors, paramedical staff, teachers etc) also took to the streets to fight for their rights. Thus a culture of ‘change’ evolved within the society. Governments mended their ways at the outcry of the public. This in itself was a huge achievement for the battered citizens of a third-world country.

Then came the year 2013. The Election Year. People believed in democracy despite all its weaknesses. They understood that Pakistan is still a sapling (where democracy is concerned) whose growth has been stunted by dark oppressive powers for too long but not anymore. Now it has the free air to breathe, fresh rainwater and nutrients to grow and most importantly uninterrupted space to spread its roots both in depth and length. And this I believe is the reason for the large turnout of these elections.

Not only was the turnout huge but the excitement was tangible too. People thronged the roads with the colorful flags and symbols of different political parties. Party affiliation differed even within families. In Punjab, youth and women sided mostly with PTI and men with PML N. These voters persevered despite the intensely hot weather. Some polling stations had no shade or facilities of drinking water but no word of complaint was heard. In fact, in a few residential areas of Karachi where polling was delayed due to technical reasons, inhabitants of nearby houses provided water to the voters standing in long lines! This was the level of camaraderie and sportsman spirit among the people. I even overheard people saying, “Aaj tu Eid ka din lag raha hai…” Perhaps, festivities of Election Day were greater than that of Eid because they were visible on a greater scale – all over the country on the same day! Hamari tu Eid bi ek din nai hoti, lekin election tu ek din ee hua na…!

Furthermore, as soon as I logged onto facebook after having cast my vote, I was overwhelmed by pictures of Stamp-marked-thumbs and statuses regarding ‘Naya Pakistan.’ At first, I couldn’t stop laughing at the pictures of thumbs of all sizes some hairy and others non hairy. But then I regretted not having taken a similar picture – not to put up as a facebook DP (no thank you :p) but as a memory of my first ever vote!

However, one thing is for sure – 180 million people of Pakistan would never forget this day in their lives. This includes both the fortunate voters and unfortunate non-voters. An interesting incident in this regard was the bridegroom in Multan who cast his vote with his entire barat. That would’ve definitely made a very interesting DP – Dulha with the ballot box!

Nevertheless, the turnout for these elections could have been even greater, had the Election Commission of Pakistan taken a few more steps. Firstly, the idea of postal ballots should have been advertised more. Its last day was 25th April which slipped by quietly. By and large, people didn’t even know about it. Secondly, a lot of voters were registered in their hometowns where they no longer lived. Consequently they missed the opportunity to vote. Either the text-message service (to find out the location of polling station) should’ve been initiated earlier or the ECP should’ve confirmed the voters’ lists and their present addresses.

In addition, President Zardari should have passed the Ordinance for Overseas voters on time. Perhaps this delay was intentional because everyone knows that majority of Overseas Pakistanis whole heartedly support PTI.

Before the results of elections started pouring out, many people were anticipating large scale change in the national political scenario.

A YLCian who's become an active citizen...! View more posts